A note from Elinor Teague to the readers:  After writing gardening columns for the Fresno Bee for 18 years, it is a pleasure to be able to continue to offer readers gardening advice and tips here on the Fresno County Master Gardeners’ website.

See below for the latest column, or click here to read past articles.

Readers’ questions and comments are always welcome. Send an email to mgfresno@ucdavis.edu

Forecasters are predicting a greater than 60 percent chance that we’ll have a third consecutive year of La Nina conditions with heavier than normal rain in the Northwest and continuing severe drought in the Southwest of the U.S .The average annual rainfall in the Fresno/Clovis area over a twenty-year period has been 11.5 inches; so far this rain season we have received only 6.4 inches of rain.

With the possibility of another drought year ahead, Central Valley gardeners continually need to adapt to changing and difficult growing conditions. Weather patterns this summer were unpredictable. We experienced extreme temperatures under heat domes as well as very heavy and unusual summer rains from atmospheric rivers. Summer vegetables and annuals stopped flowering and leaves burned to a crisp during extreme heat in June and again in late August and early September. Rain after the heat spikes led to problems with fungal problems, causing leaf damage followed by leaf fall. Leaves on heat-stressed mature landscape trees including Japanese maples and sycamores are dropping prematurely this autumn as well. 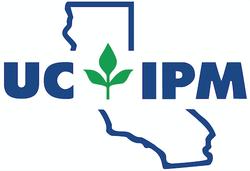 Premature leaf fall is a serious problem whether it’s caused by disease or by weather. Leaves provide shade and food for plants and remove carbon dioxide and pollutants from the air. When crop-producing plants and trees lose their leaves before harvest in summer, the fruits shrivel in direct sun.

Preventative measures can be taken to control for fungal diseases by removing any affected leaves as soon as the disease is noticed and placing the leaves in the green or organic waste bin rather than the compost pile and by spraying smaller plants with anti-fungal horticultural oils like neem oil or jojoba oil when rain is predicted. Deep irrigation of large landscape trees at least monthly until cold weather arrives is critical. It won’t be easy to determine whether a tree that lost its leaves prematurely has entered dormancy before pruning this year. Stressed trees should be pruned lightly to remove only dead and diseased wood and shaped to preserve as large a canopy as possible.

Our usual autumn planting season begins in late September and early October when we take out summer annuals and vegetables even if they’re still producing flowers and fruit and then set out transplants or put in seeds of cool-season plants. Exactly when to do this is a little uncertain this October. If we go by last year’s heat records, temperatures in November were still warm until Thanksgiving. We risk having cool-season crops that were planted in early October bolting in fall heat. So do we postpone fall planting a week or two hoping for cooler weather to ensure that plants will have a better chance of good root development so that they will have a vigorous growth period in late January (our early spring here in the Central Valley? Or do we take a chance and stick to the accustomed planting times but plant only heat-tolerant and slow to bolt varieties?

With another drought year predicted this will not be the best time to reconfigure your garden to provide as much afternoon shade as possible by planting trees and bushes on the western and southern sides of the property. However, it can be a good time to observe sun and shade patterns and to amend the soil to improve water retention. Shade will become priceless if these severe weather conditions continue.